It's taken a few days to digest all of the inventive and interactive maker activities and experiences that we enjoyed at the World Maker Faire in NYC. To sum it up in one sentence, the maker movement is global!

When we arrive in New York, we attended the Producer's Workshop and Education Forum presented by Make Magazine.  The producer's workshop was a gathering of folks like us who organize Maker Faire's all over the world.  There was representation from Canada, the U.K.,  and as far away as Qatar!  We are going to definitely be integrating some of the ideas from this session in our upcoming Faire on June 4th, 2016! 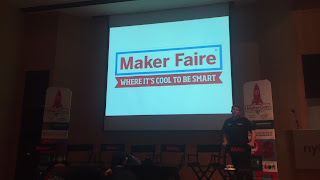 The Education Forum was amazing as well!  The afternoon was structured so that different experts were put on panels to discuss topics each hour.  We heard about a school district in Virginia that is incorporating the maker philosophy in ALL of their classrooms every day!  Dr. Bart Rocco, from the Elizabeth Forward School District in Pennsylvania, has started a maker space in their middle school called the "Dream Factory".  He is also working on getting more maker equipment available for his entire staff!  The archive of the Education Forum can be found here. 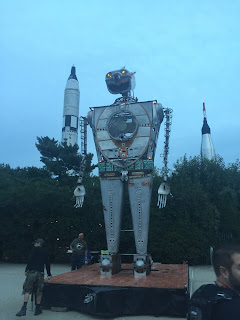 The next two days were dedicated to exploring the World Maker Faire!  The experience was amazing as we attempted to visit the 900+ makers that were spread around the grounds.  Stations ranged from 3D scanners that use your smartphone to a students who had developed a dog collar that had a blinking LED light built in so that you could easily locate your dog at night.

One of the main features of the Faire that we all enjoyed were the hands-on activities.  All attendees were able to learn to solder, create their own soda with Pepsi, invent with Strawbees, interact with a LED painting wall, and so much more!

If you find yourself close to a Maker Faire (*cough* Southwest Michigan Mini Maker Faire *cough*) you should make every effort to attend!  From 3D printers to fabric weaving, these events cover a wide spectrum and there is truly something for everyone!

Popular posts from this blog

By Joe Rommel January 18, 2017
Each year, student teams and their teachers from around the state participate in the  AT&T/MACUL/MVU Student Technology Showcase , an event held at the State of Michigan Capitol Building. This year’s Student Technology Showcase took place on December 7, representing  34 schools  across Michigan.  It was an opportunity for teachers and students to present to lawmakers classroom technology projects designed and created by students at all levels of K-12 education.   Through these demonstrations our lawmakers see the importance of technology integration into the classroom firsthand, hearing straight from students themselves.  The event was also a chance for teams to move about the rotunda of the Capitol to explore the work of teams from other districts.  These new connections helped students grow their digital literacy knowledge while discovering the possibilities of other technology integrations into school projects and curriculum. For most students, this was their first exp
289 comments
Read more

By John P August 06, 2015
Happy August! The world is picking up speed here at Berrien RESA!  We are rapidly preparing to host more than 100 educators for Tech Camp 2015.  This year we are focusing the camp on the Google Apps for Education suite.  With over 16 sessions being offered per day, there should be something for everyone! http://www.solutionwhere.com/berrienresa/cw/showcourse.asp?309 If you are interested in registering for Tech Camp , the registration deadline is August 12th! Get a jumpstart on your school year and come learn from some of the best and brightest from all around the state!
845 comments
Read more

Getting Started with 3D Printing: Part 1

By John P November 17, 2015
By now, it is likely that you have seen or heard of the concept of 3D printing.  The easiest way to think of it is taking a 3D model off of the computer and turning it into a real life product.  3D printing is an additive manufacturing process so there is very little waste when you make objects. When you decide to get started yourself, it can be VERY overwhelming trying to figure out which 3D printer to buy and how to even begin.  In this series of blog posts, I intend to share some first hand tips on how to make that process easier and help you avoid some mistakes that I have made. Finding a Printer S eeMeCNC Rostock MAX v2 Congratulations, you have examined your educational goals and figured out that a 3D printer would be a good fit for you and your students!  Expect that you will need to have a budget of approx. $700 to $1000 to get started.  That would include the cost of the machine, and a spool of filament. Here at the RESA we have a RoStock MAX v2  ($1000 for the kit
445 comments
Read more

Check out our Podcast!